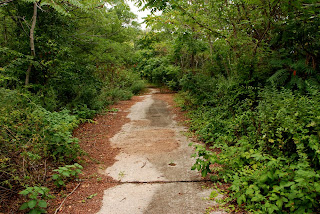 Vanishing Road via Nathan Kensinger
Anyone that has managed to catch National Geographic's Aftermath: Population Zero already knows that when we are gone, nature will reclaim the land.  But you can get a sneak peak of that by heading over to Staten Island to see the abandoned Robert Moses project The Richmond Parkway Interchange.

Originally, The Richmond Parkway Interchange was intended to be a 9.5 mile roadway that "would have connected southern Staten Island to the Staten Island Expressway" and "provid[ed] quick access to the nearby Verrazano-Narrows Bridge."  But that was not to be.  The completed project would have resulted in the destruction of the Staten Island Greenbelt.  Members of the community rallied together to save the acres of greenery leading Mayor John Lindsey, in 1966, to put an end to the project.

Now forty five years later all that is left, other than grafitti and broken bottles, is green breaking through a curving road.  Head over to Staten Island and check out a piece of history.  Or go to Nathan Kensinger's site to see some of the beautiful photographs taken of the area.

Broken Window
At Broken Window we look at going green as a quality of life issue with simple solutions.